I just want to know as per your knowledge about the H4 EAD revocation are they going to revoke the H4 EAD for sure?, I am planning to apply for H4 EAD very soon can you share your thoughts on this.

How has your H1B been filed? Change of status or consular processing?

If it is change of status, then it depends on what gets approved first i.e. H4 or H1B. The one to get approval last will define your status.

H1B is not cancelled if you file H4.

As the government is actively working on removing H4 EAD, we can expect it to go away sooner or later.

A post was merged into an existing topic: H4EAD to H1B change of status in lottery

My spouse got his I-140. Can I apply for H4 EAD at this time or I should wait to see what will happen to the H4 EAD decision? The Revoke rule affect the chances of H4 EAD approval and in case if gets approved, will they revoke the H4 EAD as soon as the rule is passed? Please advise.

At this time, I suggest to go ahead and apply H4 EAD.

The H4 EAD revocation rule has been pending for 2 years now and there is no insight into when it will finally be released. You have enough time.

Go ahead and apply.

A post was split to a new topic: H4 pending, H1B approved with consular processing

ImmigrationVoice reports that court did not find DHS overstepping its authority in issuing H4 EADs. Court has sided with H4 EAD workers and SaveJobsUSA can now ask for re-trial in the lower court, which had earlier sided with DHS too.
SaveJobsUSA had claimed that DHS has no authority to issue H4 EAD work permits.

Will H4 EAD be revoked/published in March/2020? Or is the revocation going to get delayed and will take more time? Please let us know your thoughts.

I have already shared my views on the H4 EAD termination news tracking page. Please read.

Can you please shed a little light on how the motion to intervene will help? If DHS is going to go ahead with the repeal then wont this case be moot? 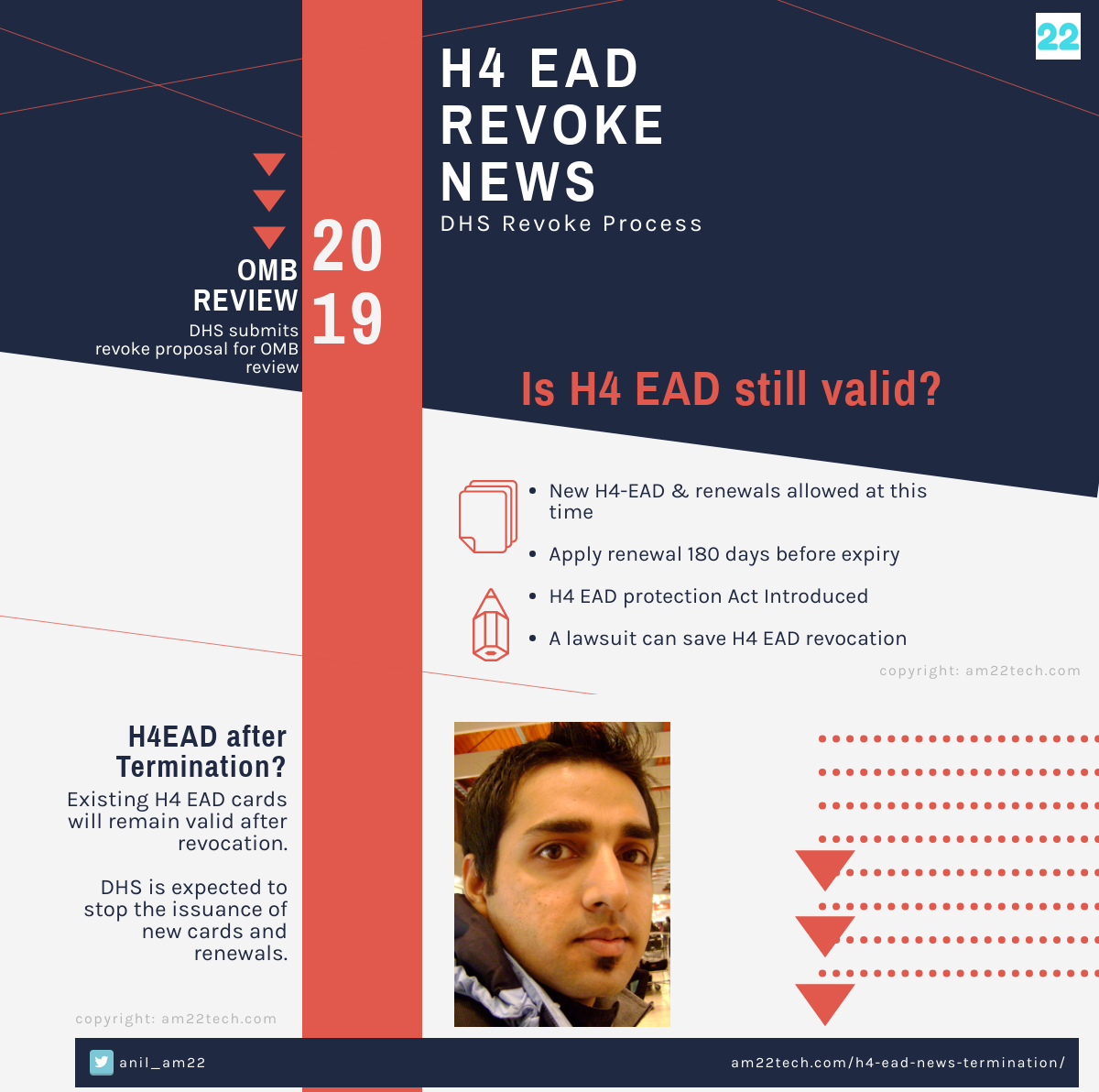 H4 EAD news update today - OMB review is pending for H4 EAD revoke rule - Coronavirus will make it a low priority. Nothing published by DHS or USCIS yet.

Federal court has decided to start case hearing again today. Till today, the case was in ‘abeyance’ meaning that court was waiting for DHS to remove H4 EAD.

The court case is against DHS allowing H4 EAD to work which DHS did not contest after Trump came to power.

Now, this appeal is contesting and want to argue in favor of H4 EAD. Ideally, this should have been done by DHS!

So, if court agrees to appeal, immigration Voice may win the case and then H4 EAD removal may be put on hold. Only time will tell.

While removal of H4-EAD in its entirety may not be right, the rules around the eligibility can be made stringent just like any other non-immigrant work petitions. I personally have seen several spouses who are not even qualified remotely to perform the type of work that their job expects them to, occupying positions which ultimately is a denial to well-qualified professionals (be it non-immigrant or immigrant or American Nationals).

Your point is correct.
With due respect, my point is that it is the business’s responsibility to interview the candidate before hiring them for job.
Most of the time, if someone in-eligible to perform a job gets the job, it means that that business just needs sub-standard workers.

This is what is market economic equilibrium. Apple or Google set their standards at the same time as well other small IT companies.
Weed grows with grass and it is natural. It depends on the owner if he wants to keep grass clean or stay happy with weed + grass.

I believe the valid point that Raj is illustrating, is that H1B is for supposed high-skilled workers, whereas H4EAD is given exemption to this rule - qualified through marriage? Why should H4EAD not have to abide by the parent rules of the H1B? This is nothing but a simple loophole to bypass the H1B cap and skills criteria. A for-profit business’ responsibility first and foremost is to make as much money as possible for the stakeholders, unfortunately the staffing managers are the ones getting the big payout and becoming rich via the H1B scams, because in the end it’s the investors that are going to lose… The government’s responsibility on the other hand, is to ensure the livelihoods of the national citizens take precedence over businesses attempts to undermine regulations and unethically damage the integrity of an industry. As for the garden reference, when a person lays down a new patch of grass they don’t bring the weeds with it.

H4 EAD is like green card. I cannot believe these tech guys are blatantly exploitative and trying to sound sympathetic. h4 ead will not only impact Americans also the h1b guys who have locational restrictions. H4 ead people can go anywhere work for anyone. They have much higher chances of being hired as full time employees than h1b guys. I cannot even believe how it is possible.

H4 EAD news update today - OMB review is pending for H4 EAD revoke rule - Coronavirus will make it a low priority. Nothing published by DHS or USCIS yet.

As per my opinion, anyone who is not riding the H1B boat can never understand the H4EAD’s real value.
It is market demand and supply that drives the jobs and economy. Anyone who has skills will get hired.

My point is if Primary visa does not have EAD dependent should not have EAD also. It is a loophole. I think they want to close this one. Because in my company really talented h1b guys with far more experience do no get the opportunity to be an FTE, Someone who started working only an year back with very elementary skills has become an FTE just because the person has a H4 EAD. It is just not fair for those who are on h1b. As an FYI H1B visa holders are one of the major group that opposes h4ead precisely for this reason. With new restrictions, scrutiny companies don’t want to go through the hassle of hiring h1b employees. H4 ead is an easier option for routine jobs.