I am applying for ACS skill assessment as spouse. In the employment document requirement, it is mentioned that I need to provide at least 2 evidence of salary. But I have last 3 months pay slips. As I left job in 2012, so I do not have any other evidence like bank statements.

Please let me know if salary slips will be enough ? I am not primary applicant. 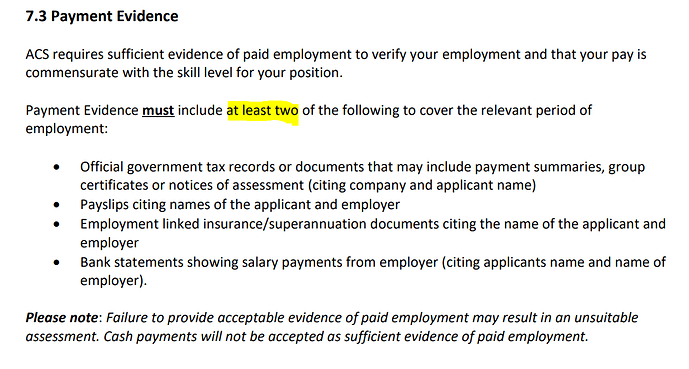 You can provide form 16 issued by your employer or the EPF statement.

Is this a new requirement or it was earlier as well? Because my husband just provided salary slips and ACS was successful for him. He did not have to provide other evidences.

Its a new requirement. ACS had no requirement of payment evidence before unless they asked for it specifically for any specific case.

Dear Mr Anil @Anil.Gupta,
I am working on doing ACS Assessment for my wife as an ICT Business Analyst. I need your advice please, ACS is requesting two payment proofs and my wife gets her salary in a cheque form or cash…She can get pay slips. What other payment proof she can get to satisfy ACS payment proof requirements…her bank statement doesn’t show salary and there is no taxation system here in Kuwait…any advice will be highly appreciated. Thank you

@MOD1 I am also in the same situation. Do you have any update?

Why don’t you have form 16 if are from India? Its a tax deposit document that company issues to employee and are legally bound to issue it.

Bank statements can be requested from bank if they are not available online.

I understand we need to submit 2 docs to prove salary evidence.But a lot of doubt arises now compared to previous ACS requirements.
Can some one please clarify on the following doubts of new changes.

Is this letter mandatory from company, I am not sure if they most company will be ready to give such a letter on why they cannot provide reference letter which makes no sense at all.

Finally the whole ACS thing has become increasingly complex and I don’t understand why a lot of changes in ACS.

Two payslips are required from each year of work experience completion. Once from the start and other from end of year.

You do need declaration from employer. If the company has closed business, then its a genuine reason which should be acceptable to ACS.

Yes I am also dealing with the same predicament. I can only provide bank statements and experience letter with salary information. No pay slips for previous companies. I feel like I am stranded at the moment unless there is an alternative to this problem.

We have given an extensive list of documents that you can give as a proof of payment if you do not have salary slips.

Is there any alternative if the company is not ready to provide the reason of not issuing the Reference Letter on Company letter head? Would the mail from HR denying the same work?

I don’t think ACS is accepting any other proof. You can try the email but i am not sure.

You can also ask ACS if they can accept the HR email copy.

I’m not from India and have the same issue… I don´t have all the pay slips. Could anyone could help me with the following questions?

a) From my current job (since Nov 2013) the oldest pay slip is from July 2014. HR Team told me that older pay slips are not available because there was an update in the payroll system. Do you think they consider all my tenure in my current job if I get this pay slip from July 2014 and the last one translated? The requirements says “at least two pay slips” Also, I have the Form “F 37” in Mexico for 2013 (it´s an annual format) but I don´t know if it´s OK. I checked out the Form 16 in India and it´s pretty similiar.

b) From the previous job ( 6 months in 2013) This company also told me they upgraded the payroll system, thus being unable to provide those pay slips. They are also offering the “Formato 37”.

I just want to get a positive assessment of these 7 years of experience to get the right points. Australian Immigration process is not as straightforward like Canadian one, let alone it´s even more expensive, so I don´t want to lose money

Thank you for any help you can offer regarding these topics.

I only have pay slips issued by my first company and the salary paid in Bank. I had closed my bank decade ago and don’t have Bank statements to show the salary credit and I was never issued Form16 as my salary was below 1 lakh.

Can I only submit Payslips ? would that be enough as I cannot provide second salary proof.

If you don’t provide two separate proofs of financial documents, ACS will ignore that portion of work experience completely.

Hi Anil,
Now I can see the invitation for 90+ points. Is there any chance to get invitation for 75 points. Many are saying they are waiting from long time even they claimed 85 points.
Please let me know. So that you can decide to apply.

I suggest to use this app to find your chance of invite yourself:

Thank you Anil, here also showing 95 points for current invitation. But people who don’t have Australian education and experience they will gain max 80-90. Is there any chance for points 80s or 70s in between.